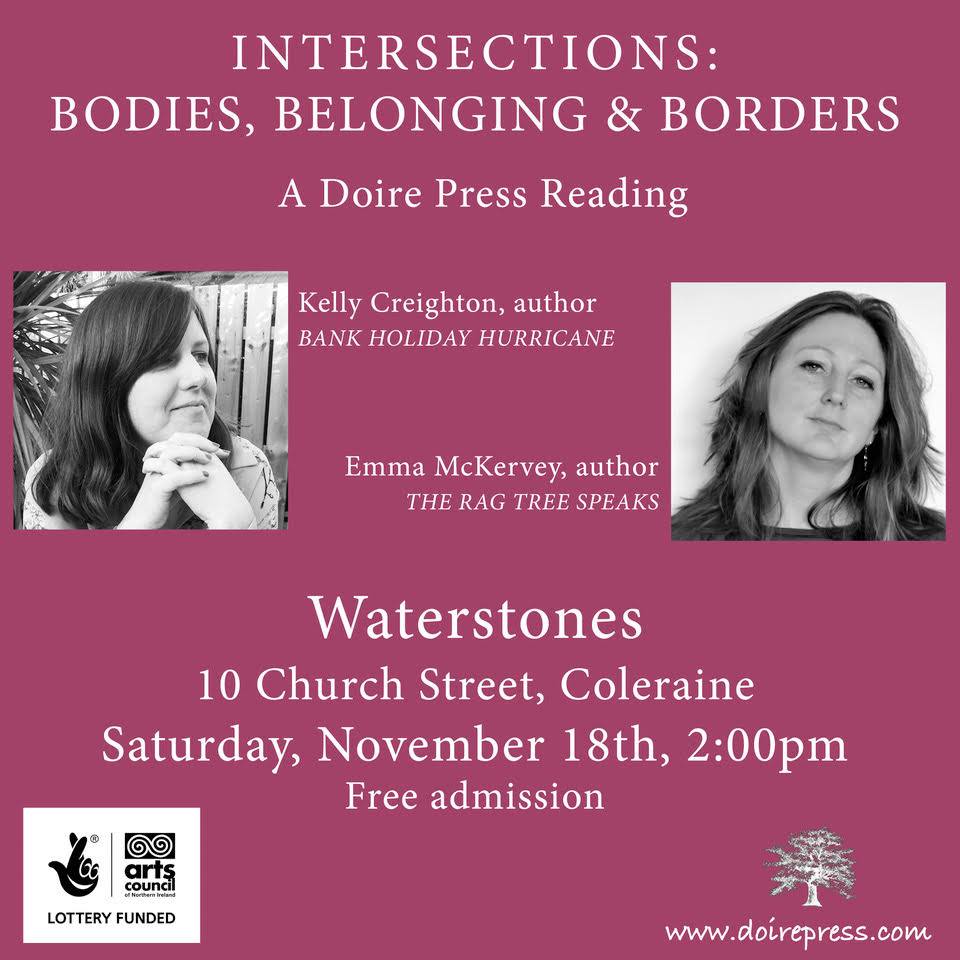 Book lovers on the North Coast are in for a treat this weekend as not one, but two, local writers visit Waterstones Coleraine as part of a special reading tour by Doire Press.

Bangor author, Kelly Creighton, and Holywood poet, Emma McKervey, will be at the store on Saturday, November 18 from 2pm, when they will each read from and discuss their new work.

The event is the third stop on the seven-date tour, which also includes poets David Butler and Annemarie Ni­ Churreain, and will see the writers visit Kilkenny, Belfast, Bangor, Galway, Cork and Dublin.

Kelly’s debut collection of short stories, Bank Holiday Hurricane, has been described by Portstewart author Bernie McGill as ‘truthful, gritty, hard-hitting stories’ which are ‘distinctive, powerful and filled, at times, with an electric high-wire tension’. 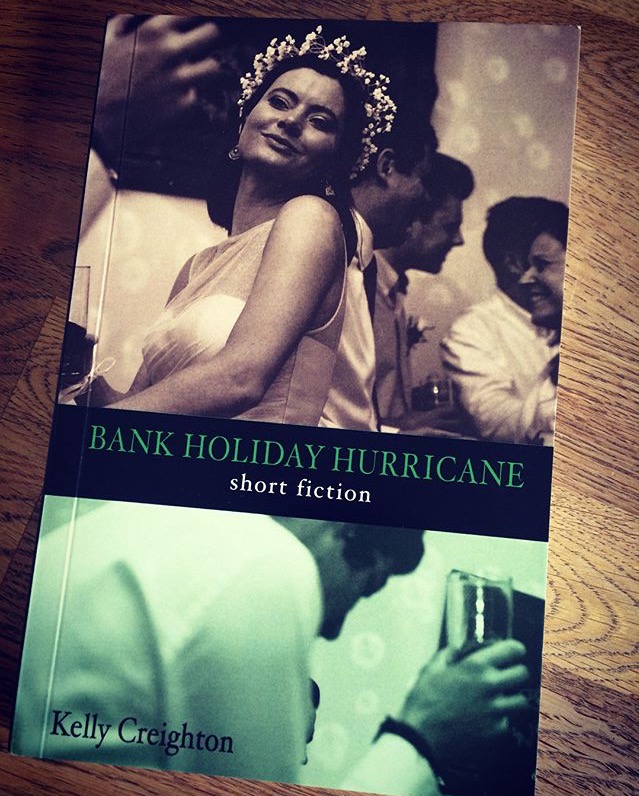 Meanwhile, Emma’s debut collection of poetry, The Rag Tree Speaks, has been described by Seren poet Carolyn Jess-Cooke as ‘unforgettable and cacophonous’. She said this is a collection that ‘offers strident narratives and emotive scenes across a staggering range of subjects … a dazzling new voice in Northern Irish poetry.’

“I particularly like the idea of a cross-genre tour,” said Kelly. “I believe stories are meant to be told and heard. A writer should be a reader of her work. It adds an important layer to the experience of understanding – for both writer and reader alike. I think my reading will complement Emma’s poems.”

She added that Bank Holiday Hurricane was “largely about bodies, belonging and borders,” so fitted in perfectly with the overarching themes of the tour.

“The collection consists of 16 loosely linked pieces of short fiction; characters show up on the periphery of each other’s stories, the majority of which are set in an unnamed Northern Irish town that is most definitely a weaving together of many places.”

Bank Holiday Hurricane is Kelly’s second publication, with her debut novel, The Bones of It, previously published by Liberties Press. It was named the San Diego Book Review’s 2015 Book of the Year and was also nominated for the Kate O’Brien Award.

With an extensive publishing history, Kelly was also a former runner-up in the Michael McLaverty Short Story Award and has been shortlisted for numerous fiction and poetry prizes. Meanwhile, her work has featured in literary journals including Litro, The Stinging Fly and Cyphers. She is also found­ing editor of The Incubator, a journal showcasing contemporary Irish short stories.

A regular visitor to the North Coast over the years, Kelly has enjoyed many holidays in the area, with frequent trips made to Coleraine and indeed, to a certain bookstore.

“I’ve always had a soft spot for Coleraine and when I’m there, I always visit Waterstones,” she said. “So I’m looking forward to reading from my work there on Saturday.”

Also relishing her reading at the Coleraine bookshop, Emma said she was “very much looking forward to the event in Waterstones in Coleraine.” 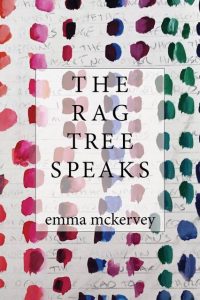 “Kelly’s own short story collection is fantastic and I respect her greatly as a writer,” she said. “I think our two styles chime well together and it should be an enjoyable afternoon. I’m deeply grateful to the Arts Council NI and Doire Press for their unfailing support.”

Having won the 2015 PoetryNI/Translink Poetry Competition, Emma was also shortlisted for the NI National Poetry Competition and the Bord Gais Irish Book Awards’ Poem of the Year Award in 2016. She said that a love of poetry had been with her since early childhood and that she started writing her own poems aged just seven, after her sister gave her a special hardback notebook.

“I was fortunate enough to have a mother who loved Walter de la Mare and a sister who was a Spike Milligan fan,” she said.

A break from poetry followed, however, as Emma became a profes­sionally trained cellist and saxophone player, but she returned to her writing in her early 30s “as a reaction to not having had a creative outlet for some time, sealed away as I had been with small children.”

“The emotional response to having children, the combination of joy and utter tedium in raising them, and the sheer amount of time spent standing on beaches and in woods observing them explore and observing the natural world, lead to a strengthening of the inner voice of poetry which I had not listened to for so long,” she said.

“My collection, The Rag Tree Speaks, is a selection of poems written over the last four or five years and the theme which arose when collecting the poems together is the human need to impose narrative – mythology, faith – on the natural world to try to explain the wonder of it all. It’s written from a humanist perspective and looks at love, parenthood, Greek mythology and ‘the mechanics of the celestial’, among other things!” 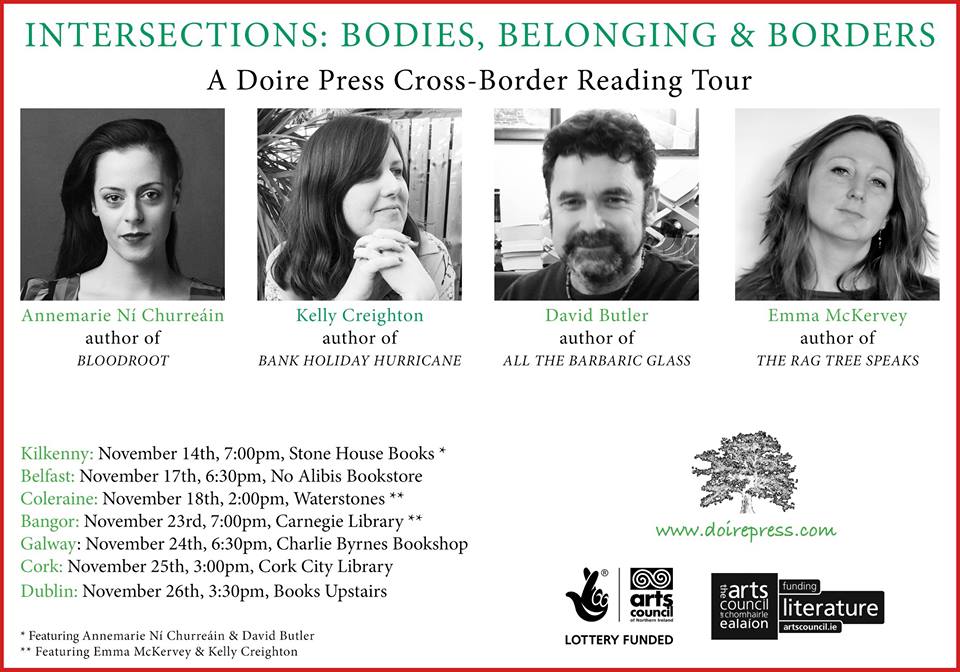